PXP - Food for the Cells, Elixir of Youth

While the medical industry boasts of great advances in pharmacology and surgical procedures, including state-of-the-art million-dollar machines, millions of people are suffering and dying from chronic diseases like diabetes, hypertension, heart disease, arthritis, Alzheimer's Disease, cystic fibrosis, eating disorders, end stage renal disease, osteoporosis and of course, the Big C – Cancer. According to the New York Department of Health website, chronic diseases are responsible for 7 out of 10 deaths in the US and affect the quality of life of 90 million Americans.

In the Philippines, more than half (57 % ) of the deaths in 2002 were related to chronic diseases, according to World Health Organization (WHO) estimates.

DIABETES
Diabetes is one chronic disease that affects 3.36 million Filipinos, according to the Department of Health. It is the country’s leading cause of adult blindness, kidney failure and non-traumatic limb loss.
Lito Patricio, 52 years old, knows first-hand how diabetes can lead to all kinds of troubles. At 29, he was diagnosed with type 2 diabetes. He took his medications religiously. At 45, he needed laser surgery on both eyes as blood vessels in his retina erupted. Two years later, he needed to have an operation again. But this time, the pressure on his eyes was too great. 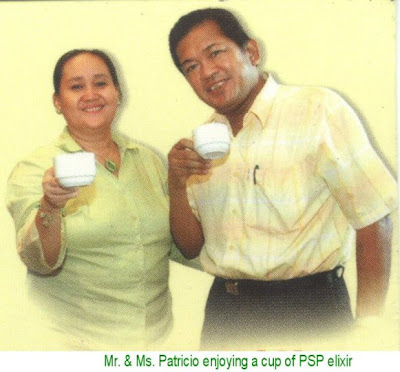 “The doctor told me my kidneys were damaged and I needed a transplant immediately,” says Lito. A transplant would cost from P 500,000.00 to P 1 million pesos. Either that or he had to be prepared for a lifetime of dialysis.

Lito remembered that his mother had died after her second dialysis. He was paralyzed with fear. He couldn’t afford a transplant and was afraid of dialysis. He told nobody about it and hoped it would just go away. On June 6, 2002, he was rushed to St. Luke’s hospital for emergency dialysis. He said he was so sick that he didn’t know where he was.

On his second dialysis, Lito had a strange experience. “I saw my wife on one side of the bed and my son on the other,” said Lito. “Then, I saw my body on the bed, very still. I then realized I was moving up – very fast… I then saw a very bright blinding light. I knew it was God,” Lito narrated. He said he then prayed, “Lord forgive me for all my sins. If you want to take me now, I am going with you, but I am not yet finished here on Earth. My sons are still studying. And how about my employees?”

Lito swore that he then heard a very loud voice telling him: “Forget your past! Have a happy life! Do good to others!” And then he woke up.

According to Lito and his wife Josephine, the doctors were surprised that he woke up so soon. He had only 30% oxygen in his body and was supposed to be in coma.

Afterwards, Lito’s life revolved around dialysis three times a week. “I stopped dreaming. All I could do was count the days to the next dialysis,” said Lito. 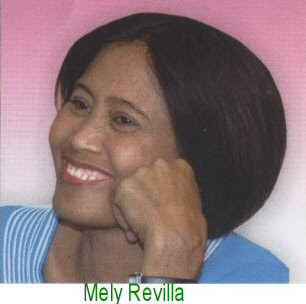 Mely Revilla is 48 years old, a housewife with three children. She says she is often highly stressed. When she was in her 30s, she was already hypertensive. At 38 years old, she suffered a mild stroke. By November 2004, she felt very weak. “My body was bloated. The doctor said that my kidneys were damaged,” she recalls. By January 2005, she blacked out and was rushed to the Polymedic for chronic kidney failure. She was then transferred to the National Kidney Institute. There, she got infection due to the catheter twice. She was given blood transfusion.

Weak and bed-ridden, she had to undergo dialysis treatment twice a week. She even had to be spoon-fed.

Mely was introduced by a friend to a food supplement called Alfa PSP Plus or alpha polysaccharide peptide. Almost immediately, she felt her strength coming back. “After ten days of taking PSP, lab results showed that my kidneys were 70% normal!” she says.

“Unfortunately, after 2 years of no dialysis, I had to undergo dialysis again last month because of stress and UTI (urinary tract infection),” Mely reveals. But she is confident that the dialysis is only temporary.Mely was the first dialysis patient to take PSP. Fellow dialysis patients found hope.

Lito Patricio had been undergoing dialysis 3 times a week for four years. His doctor reduced his treatments to twice a week after he started taking PSP. One year later, it was down to once a week. “PSP is a gift from Heaven! My sight became clearer, my strength came back, the pains are gone, and I regained my sex life!” says Lito. 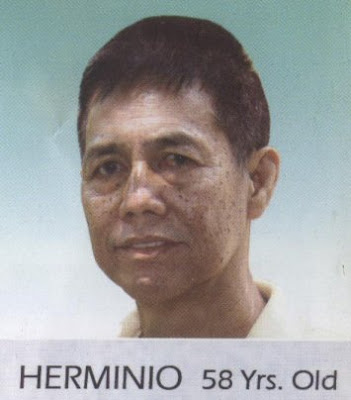 Another diabetic and dialysis patient is 59 year-old Hermie Concepcion. He began dialysis treatments – three times a week – in May 2005. In September 2005, he started taking PSP. After 3 months, he was down to two dialysis treatments a week. Since December 2006, he has been going for dialysis only once a week.
“He used to take 12 kinds of medication for his various illnesses like hypertension and carotid stenosis (obstructed carotid artery). Now, he takes only PSP and the medicine for hypertension,” Hermie’s wife, Lota, says proudly.

Peptides are formed from the linking of amino acids. Amino acids are the building blocks of proteins. Polysaccharides are essentially carbon sugars or complex carbohydrates which are used as sources of energy by the cells. 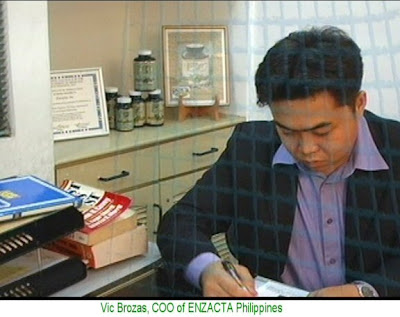 Functional foods or nutraceuticals are foods or from foods that have supposed physiological benefits like protecting the body from chronic diseases.
According to Enzacta’s literature, “Alpha Polysaccharide-X-Peptides (is) a functional nutrient which is a combination of complex carbohydrates and vital proteins having essential and non-essential amino acids plus the most important vitamins and minerals and antioxidants in dry powdered form.”

Russell Hall, CEO of ENZACTA, which has its headquarters in Mexico City and branches in Spain, the Philippines and U.S.A., was in Manila in November 2006 for the launching of Alfa PXP Plus (an improved version of Alfa PSP plus) at the Shangri-La Hotel in Makati. He explained then the complex process of producing PXP. Various seeds were selected by specialists in nutrition, biotechnology and genetics from thousands of rice varieties – brown rice, short-grain rice, fragrant rice, etc. These were then planted in highly alkaline and toxin-free soil rich in Spirulina. The farms are located in Siam valley in Thailand which, according to ENZACTA, is “the biggest natural organic plantation treasure in the world”.

Hall said that he had just upgraded their machines where the harvested rice undergoes Hydro-Thermal Process which extract the Alpha PSP and make it 90% bio-available; i.e., the peptides are almost completely absorbed by the body’s cells.

FOOD FOR THE CELLS

Vic Brozas, a respiratory therapist by training, was amazed when after a month of taking PSP, his arthritis, hypertension and hyperacidity disappeared. Not only that, his mom’s blood pressure dropped and her arthritis and hyperacidity were cured after one month of daily PSP intake. And so were his dad’s hyperacidity and numbness of the limbs. He joined Enzacta after these astounding effects on his family.
But what shocked Vic was the effects of PSP on dialysis patients and paralyzed people. “If you lessen dialysis from three to two times or once a week, then something must be happening to the cells of the kidneys,” says Vic. “If you feed your cells the right nutrition, they become healthy.” 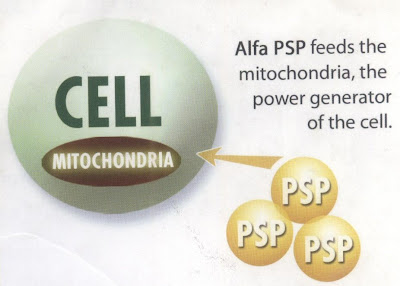 Rock climber, aerobic instructor and former host of the Fitness Barkada segment on GMA 7, Mylène Imao, 32, is the picture of physical fitness. “As an athlete, I was dehydrated,” she says, “because we athletes have to keep low body weight.”


As a result of her dehydration, her kidneys were damaged. She bled constantly. “When I ran, I would bleed and excrete solid stuff,” she says. “When I drank coffee, my sides bled,” she adds.
Mylène was hospitalized. The doctors said it was severe case of UTI or gallstones. She recovered but when she did strenuous exercises, she would bleed again. 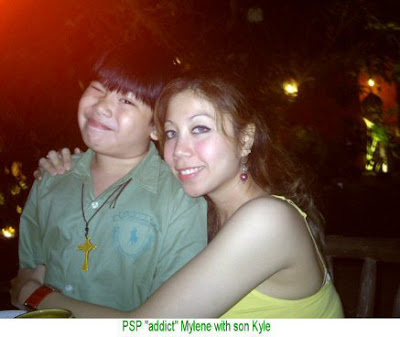 “I started taking PSP three years ago and the symptoms disappeared,” she says. “I stopped for a month; then, half of the symptoms came back so I take it regularly up to now,” she explains.

Mylène, wife and mother, works out three times a week and keeps a busy schedule. She avers, “PSP, I can’t live without it; it’s a good addiction. I take PSP now to maintain good health and reverse the aging process.”

ANTI-AGING and BEAUTY
Hans Palacios, a businessman, is amazed at the anti-aging effects of PSP. “Before PSP, I was a very different person. I was an old man, I had a lot of body aches, I took a lot of painkillers for my back. When I started taking PSP, things changed. I got my stamina, I was able to work out better, but more importantly, the pains disappeared,” he says. “PSP changed the quality of my life. It gave back my life.” 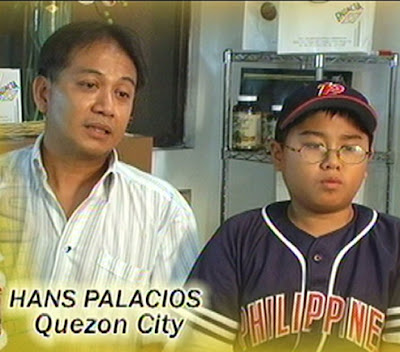 Hans introduced beauty icon and radio/TV host Cory Quirino to PSP. He says that Ms. Quirino refers to PSP / PXP as “the very foundation of a hardcore health program”. 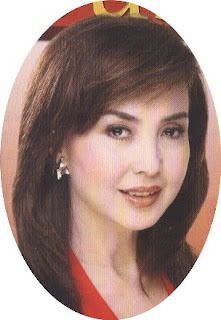 Ms Quirino, in turn, introduced PSP/ PXP to her good friend, actress-businesswoman Isabel Rivas. According to Hans, Ms. Rivas believes that PSP / PXP truly promotes cellular regeneration, which is proven by how beautiful and smooth it has made her skin.

Lito and Josephine, Hermie and Lota, Hans and almost all PSP users say that PSP has an interesting side effect – Enhanced Sex Life.

Medical doctor Annabel Soriano says that the easily absorbed PSP “energizes the cells, boosts the immune system and throws out the toxins. Thus, the body can feel increased energy immediately”. Perhaps in layman’s terms, one could say, “More Energy, More Sex; No Energy, No Sex.”

In March 2006, Amor Fajardo was diagnosed with Breast Cancer. But she couldn’t undergo chemotherapy because she was pregnant. Instead, she started taking PSP.

Eight months later, during the launch of Alfa PXP Plus at the Shangri-la in November 2006, Amor proudly proclaimed to everyone there that she had just given birth to a baby girl a few days before. She had beaten Cancer. In October 2007, she had her second child.

Since the 1860s, the Germ Theory has become the bedrock of allopathic or Western conventional medicine. Diseases are caused by germs and so medicines should kill these germs or bacteria. Damaged cells should also be killed by radiation or other means.

Since the 1990s, studies on such things as antioxidants, enzymes, glyconutrients, saccharides, polypeptides, phytonutrients, etc. suggest a new medical approach. Instead of bombarding the human body with chemical medicines or radiation to kill bacteria or cancerous cells, we can feed the body’s cells with functional foods or nutraceuticals in order to prevent chemical damage to cells, regenerate them and thus fortify the immune system.

In the new millennium, the new wonder drugs may not be drugs at all. They may simply be food – food for the body’s cells. After all, Hippocrates himself said, “"Let thy food be thy medicine." 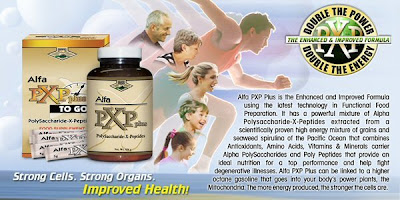 Posted by holisticliving at 9:48 PM

Dewayne McCulley also had a near death experience from diabetes.

To cope with life in the new harried millennium, the Holistic Doctor prescribes: Flower Essence Therapy.